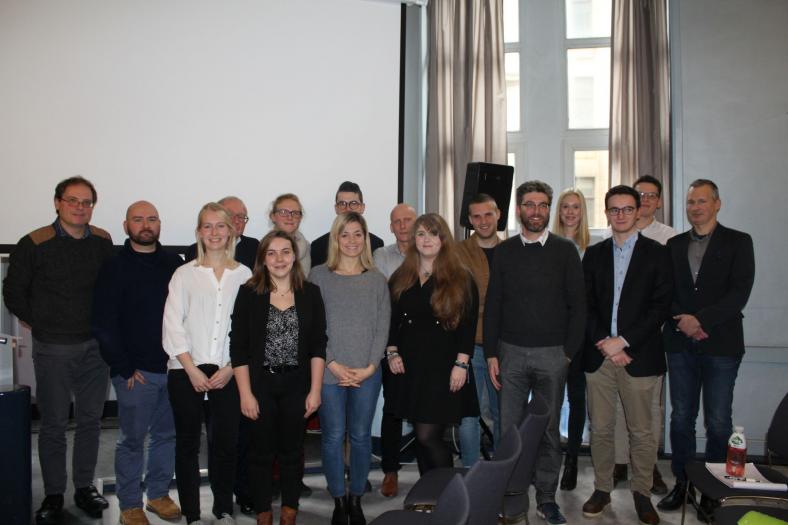 Each year, CegeSoma (State Archives) organises a conference for recently graduated historians in which they are given the opportunity to present their MA-research. The topics are in line with the key-themes of CegeSoma : the First World War and the Second World War. The conference is open to the public : students, researchers, journalists, amateur historians etc.

On 28 November 2019, some twenty students from different Belgian universities were selected based on the quality of their master's thesis. Our colleagues Pierre-Alain Tallier, Dirk Luyten, Geneviève Warland and Bart Willems moderated the debates. Attached, you can find the summaries of the papers presented.

The morning session was dedicated to the First World War:

Célestine HOTELET presented a paper about the reconstruction of the city-centre of Namur after the war, Gilles DE BEUCKELAER analysed the committees for refugee children in Tilburg during the First World War, Benjamin BRULARD revisited the history of the Spanish Influenza in occupied Belgium, Linde GOOSSENS drew a portrait of the city of Ypres in the wake of the war and Arnaud SOUDRON examined the phenomenon of prostitution in Charleroi.

Charles LUX presented the context of the prosecution of German war criminals in Belgium after 1945, Aline THOMAS recorded the traces of the war in public space at Roulers, Cécilia WANEKEM put the stakes of a recognition of the Armenian genocide into perspective and Robin VAN DAMME dove into the history of the Brialmont forts in Liège from 1888 to 1940.

The afternoon session was dedicated to the Second World War:

Kobe DE GEYTER presented a paper about Belgians fleeing to Portugal, Hannah FLUIT gave a lecture about the national revolution and food shortages in France under the Vichy regime, Louis FORTEMPS and Vincent GABRIEL explained the role of Geheime Feldpolizei - Gruppe 530 and Geheime Feldpolizei - Gruppe 648 respectively, and Emmanuel VERMEIRE analysed the role of the Secret Army in Groot-Oosterzele.

Juliette LINARD DE GUERTECHIN described the manner in which children of war prisoners have experienced the separation from their fathers, Géromine POULAIN presented the results of her research into the social and medical care for agents of the Intelligence and Action Service after the war, and Maurane BAERT revisited the war commemoration environments in Beerse, Merksplas and Rijkevorsel. To conclude, Charlène CRAHAY presented her study of how imprisoned collaborators were treated in the immediate aftermath of the war.

All of these papers illustrate the rich potential for new research about both World Wars, often based on numerous archive holdings only recently available for research.