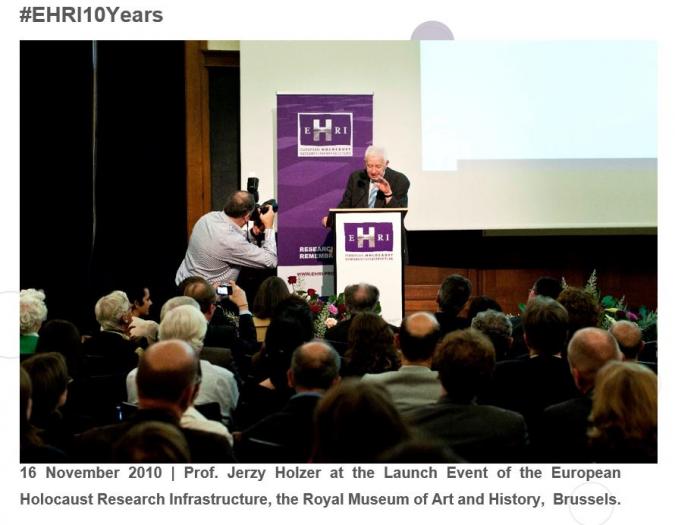 The 16th of November 2020 marks the 10th anniversary of the launch, in Brussels, of the European Holocaust Research Infrastructure (EHRI). This is the occasion to look back on the history and the realisations of EHRI, which has entered its third project phase in anticipation of a hopefully successful transformation into a permanent research infrastructure.
Research into the Holocaust is subject to a strange paradox. The Holocaust was by essence a European phenomenon: Nazi-Germany systematically exterminated Jews not only in Germany but also in other countries it occupied or annexed. The sources about the persecution of the Jews are broadly scattered however, and no overall finding aid is available.
One of the key missions of EHRI is to make these scattered sources more easily identifiable and traceable by providing an overview of the institutions in which they are conserved and by bringing together the collection descriptions of Holocaust-related sources in a user-friendly manner and making them accessible. Right from the onset, EHRI aimed at digital accessibility. Thus, researchers can find archive institutions and collection descriptions from various countries in Europe and elsewhere in the world through the research portal. Over 325.000 descriptions are available. Within the framework of ERHI-3 this number is bound to increase. You can discover how this portal works and the research opportunities it offers here (Youtube film in the bottom of the page EHRI).

The research portal is not only intended to simplify the work of individual researchers, but also to foster international cooperation between Holocaust researchers. For example, if you want to conduct comparative research between different countries, it is much easier to look for relevant sources or find clues for transnational research themes.
EHRI is not only useful to accomplished Holocaust researchers; its fellowship programme gives young researchers the opportunity to carry out archival research in one of the partner institutions of EHRI for a short period of time.
Throughout the years, EHRI has organised a number of workshops and colloquia that were often centred around underexplored regions or issues. This has also contributed to the emergence of an international research community that is in contact through EHRI. Other initiatives such as summer schools and online courses were additional building blocks that shaped the research community.

Digital humanities not only facilitates access to archives, it also serves as a means to advertise sources and archives among the broad public in an innovative and interactive manner. The document blog is a bright example of this. For the memory of the Holocaust, the importance of a digital infrastructure accessible to everyone cannot be underestimated either.
The collaboration among colleagues with very different backgrounds is one of the most enriching experiences that EHRI has to offer. First, there is the geographical diversity: EHRI's partners come from various European countries (including Central Europe) from Israel and the USA. This diversity is also found in the disciplines: next to historians, archivists and other collection specialists, IT specialists play a key role within EHRI. These factors contribute to the shaping of a broader view and the realisation that research can but benefit from international and interdisciplinary cooperation, thereby allowing us to stay abreast and informed of the latest developments.

Dutch historian Conny Kristel played a crucial role in the establishment and progress of EHRI. Not only did she help setting up EHRI, she also coordinated its expansion while working at NIOD. Conny Kristel earned her PhD under the supervision of Hans Blom, with a dissertation on the historiography of the persecution of the Jews in the Netherlands, in which she drew a subtle analysis of the lives and works of Abel Herzberg, Jacques Presser and Lou de Jong. Conny Kristel carried out her role as coordinator in a determined but inclusive manner and managed to make people from various horizons work together, and to create good relations with the persons in charge of European research programmes. Sadly, Conny Kristel passed away on 6 October 2018. In her honour, the fellowship programme that shall be continued within the EHRI-3 framework carries her name.
CegeSoma was one of the ‘founding fathers’ of EHRI and is still today among its partners, together with Kazerne Dossin, for the third phase of EHRI and the so-called ‘preparatory phase funding’ of EHRI. The goal of this phase is to transform EHRI into a permanent research infrastructure. The horizon for this conversion is January 2025, the eightieth anniversary of the liberation of Auschwitz.

Other news
CegeSoma in the media
Three questions to ... a new 'doctor', Anne Chardonnens, in charge of digital access to CegeSoma's collections
Les Transmissions. La guerre en héritage (TheTransmissions. The Legacy of War)
Lives turned topsy-turvy, forever
A new colleague reinforces CegeSoma’s permanent scientific team
The historical truth and the perception of the Second World War in Belgium in these times of so-called ‘post-truth’
Belgian Colonial History in the JBH
Was grandpa a hero?
The peculiar summer of 1940
Farewell ….
Science and truth : archives and research
Belgium WWII in times of confinement