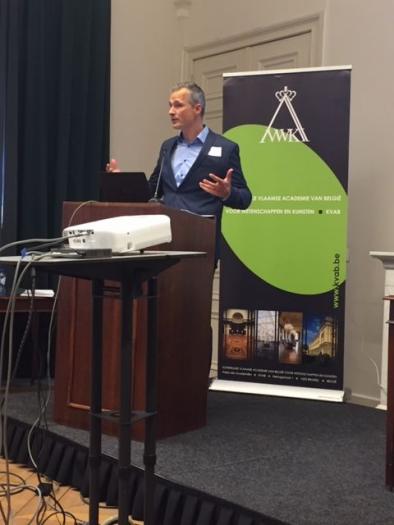 On 23 September, Nico Wouters (CegeSoma/State Archives) held the Da Vinci lecture at the Royal Flemish Academy of Belgium about the historical truth and the perception of the Second World War in Belgium in these times of so-called ‘post-truth’.

In the 50-minutes lecture, Nico Wouters looks into the manner in which historians have tried to carve out the historical ‘truth’ about the Second World War in the past 75 years, against the background of intense societal debate. He discusses the tensions between ‘history’ and ‘memory’, and exercises critical self-reflection. He reasons that after 2002, WWII historians did not sufficiently manage to launch own projects based on the attitude and intention specific to science.
Tying in with the current debate about the colonial past, he argues that resisting particular societal pressures does not mean ‘withdrawing into an ivory tower’, and that the discussion about whether or not to participate in (political) public history initiatives is a false discussion. According to him, our truth claim must not only be substantiated by our methodology and our empiricism, but especially by sharpening and more closely defining the attitude and intention specific to science.
If WWII historians want to gain strength and confidence to actively take part in society, they can only manage to do so by becoming aware again of the specific status that their scientific ‘truth’ actually has.

The lecture is about 50 minutes long and can be viewed here: https://youtu.be/o4M6HKVtYKg

Other news
The censored and underground press of the two world wars now accessible via the Abraham online catalog
What's new on the Belgium WWII website
ADOCHS - Project progres
A statement from EHRI on the importance of academic freedom for research on the Holocaust
Les Enfants de la Collaboration or the Archives of the Collaboration?
A first workshop for the Postwarex project
CegeSoma in the media
Three questions to ... a new 'doctor', Anne Chardonnens, in charge of digital access to CegeSoma's collections
Les Transmissions. La guerre en héritage (TheTransmissions. The Legacy of War)
Lives turned topsy-turvy, forever
A new colleague reinforces CegeSoma’s permanent scientific team
Belgian Colonial History in the JBH