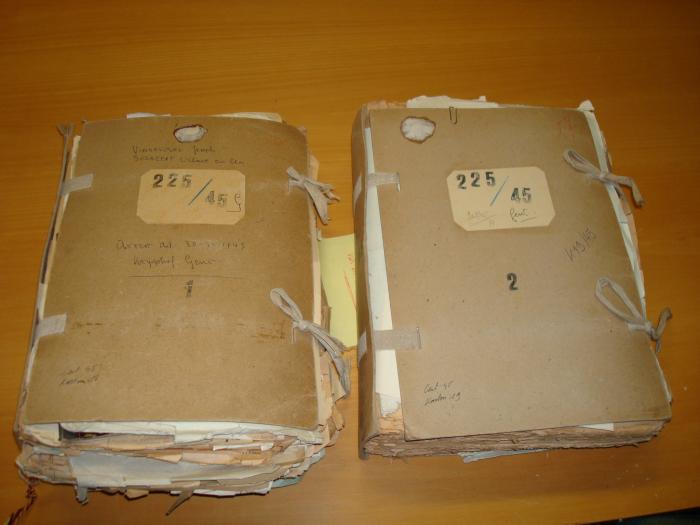 Three years after the Flemish series "Kinderen van de collaboratie", on 25 November 2020, RTBF broadcasted "Les Enfants de la Collaboration", a documentary directed by Tristan Bourlard and Anne-Cécile Huwart and co-produced by RTBF/Les Gens. Rarely has a historical documentary benefited from such a promotional campaign: about thirty online and printed press articles, several radio interviews, and a presentation on TV news the same day of the broadcast. It's hard to ignore the event, which was followed by 361,869 viewers, representing more than 24% of the market share.

A broadcast on Canvas

It is quite rare for television programs broadcasted in one of the communities to be picked up by the other. However, this is what happened with "Les Enfants de la Collaboration". Broadcasted in prime time on RTBF, the program was then aired on Canvas on January 6 and 13, 2021; the Flemish channel having in fact split the program into two episodes. For Canvas, this was a logical step, since the same channel had already shown all the series "Kinderen van...". Nevertheless, this fact is rare enough to be underlined. True, the audience rate is lower than on the French-speaking side, but it is still honourable (207,867 viewers for the first episode and 251,688 for the second) given the context: a presentation at a later hour, a first episode aired the same day as what was happening on Capitol Hill, a modest press campaign, a program entirely subtitled …

The view of historians relegated to the RTBF's Auvio platform

Initially, the documentary was to be accompanied by a second part, "Le regard d’historiens" («The historians' viewpoint »), following the example of the series shown on Canvas. The RTBF made another choice and this part is only visible on the Auvio platform and via the CegeSoma website. This second part was not shown on Canvas either. If the emotion generated by the look of the witnesses is essential, it is nevertheless insufficient when one also wants to apprehend the facts in terms of knowledge. We know how much there can be a gap between social representations and the facts themselves. The lack of public knowledge about World War II is also regularly pointed out, with an emphasis on young people. It must be noted that the lack of diffusion of the historical contextualization section, while it did prompt a number of regrets, was hardly debated, even though one of the objectives was precisely to recontextualize the facts and enable them to be understood, particularly by a "young" public. Under the heading "Devoir de mémoire: la grande passoire," journalist and filmmaker Sylvestre Sbille wrote about the program in L'Écho on 2 January 2021, regretting both the lack of debate after its broadcast and the lack of knowledge about this period among secondary school students, yet without mentioning the historical complement to the program.

The return of the "old demons"

A few days ago, during the controversy over the presence of Staf De Clercq and August Borms in a gallery of portraits of personalities who contributed to the emancipation of the Flemish language and people in a special edition of the magazine Newsweek, the historian Hervé Hasquin stated in the columns of the newspaper Le Soir : "why don't we say that there were also Walloon collaborators who were authentic fascists, whereas Flemish nationalism mainly found in the collaboration with the Occupier a way to achieve its ends".  And the former minister-president insisted on the need to explain and denounce a historical omission. It seems to us, however, that this omission in no way corresponds to reality, but rather to media choices. For a long time now, all controversies about the past collaboration of such and such personality have functioned like a soufflé with much fuss, shouting, polemics and controversies and then nothing more. The soufflé sinks and loses its power of attraction. Information favors the scoop, the announcement effect. It was not after the release of the documentary " Les Enfants de la Collaboration " that the political world demanded access to the archives, but rather after the appearance of Staf De Clercq and August Borms in the magazine 50 jaar Vlaams Parlement. However, as general archivist Karel Velle reminds us, the program did provoke an important demand for access to the archives: of the 89 requests made on the French-speaking side in 2020, 46 were submitted between November 25 (date of broadcast of the program on RTBF) and December 31, 2020. There is thus a real social demand and a need for history, for confrontation with the reality of the facts, beyond emotions.

Working in the shadows?

For many years, historians have been working on collaboration and its consequences. Of course, parts of this history remain to be written. The archives of repression are far from having revealed all their secrets. But beyond the polemics and controversies, it is also a social history of commitments that could be written, a history of legal procedures and social expectations that accompanied them. What view(s) did contemporaries have of these trials? Although the first convictions made the headlines, only six journalists followed the trial of Léon Degrelle in December 1944. There were only about twenty people in the public. It is true that the main person concerned was absent. A few months later, in September 1945, the death of Leo Vindevogel, mayor of Renaix and the only member of parliament executed for collaboration, was just an item on the day’s news in the Nieuwe Standaard, whereas ten years later, the same newspaper did not hesitate to compare this conviction to the Dreyfus affair. The complexity of these mechanisms cannot be summed up in a scoop or in emotionally fuelled anger.

We can only hope, however, that these controversies will help move the debate forward. In other words, that the management and the access to the archives of repression will be left to the State Archives, but also that the research and the dissemination of the knowledge it generates will find a real place where it is needed: in teaching, in public debate and in history books.

Other news
Was grandpa a hero?
The peculiar summer of 1940
Science and truth : archives and research
Belgium WWII in times of confinement
Discover the publications of CegeSoma or let others discover them...
Belgium WWII: New content on our blog and our website