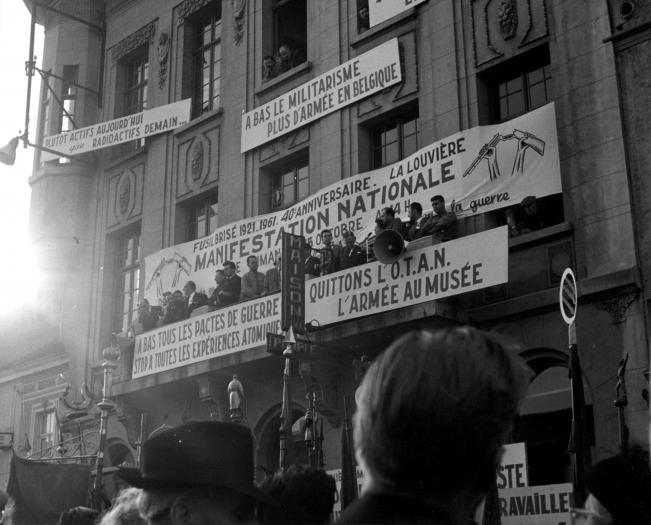 On 19 July, a new series of FED-tWIN - joint long-term research projects in which federal scientific institutions and universities cooperate structurally - was approved. The FED-tWIN Belcowar, on the economic aspects of the Cold War and Belgium, was awarded to the State Archives/CegeSoma and the KULeuven. This FED-tWIN allows the CegeSoma to fully develop the Cold War and Belgium as one of its core themes.

BELCOWAR aims to shed new light on the history of the Cold War by examining the position of Belgium within the so-called Pax Americana. The focus is on economic policy, mainly international trade (the GATT rounds), and the question of the effects of American macroeconomic policy pressure on European countries. BELCOWAR is innovative for at least three reasons: extensive unexploited archives of policy-making bodies and corporations (such as the Société Générale) kept in the State Archives and the archives of the FPS Foreign Affairs will be exploited, concepts from political science will be operationalized for this historical research, and the role of Western European countries in the history of the East/West divide will be re-evaluated.

BELCOWAR builds on recent social-historical research that, based on new archival collections, has situated transatlantic relations within a much broader and much more complex web of multilateral connections. This research emphasizes the importance of European agency (as opposed to a strongly US-centric approach) and the role of exchange and negotiation between state and non-state actors (pressure groups, social movements and corporations). This renewed historiography pays close attention to how economic dimensions shaped transatlantic relations. BELCOWAR ties in with these new developments and shifts the focus to the pressures that small countries face when they depend on the protection of a great power, the ways in which they deal with them, and how considerations of international security are combined with economic interests. Belgium is a very relevant case study, both in terms of actors (P.-H. Spaak, P. Harmel), location (seats of NATO and EU) and economic structure (Belgium is a small open economy heavily dependent on international trade). BELCOWAR aims to examine how Belgian governments and non-state actors dealt with conflicting interests, how loyalties developed over time, and how they related to the conjuncture of the Cold War, the development of European integration, the changing global context, administrative shifts and ideological differences.

The FED-tWIN BELCOWAR comes at a particularly good time. At the end of November 2020, the Specialized Scientific Committee of CegeSoma expressed its support for the Cold War as a new thematic area of our study center. On several occasions since, our researchers have put their heads together to develop a research agenda complementary to the BELCOWAR project. As Belgium's political-diplomatic participation in the Cold War has already been extensively discussed, they choose to focus mainly on the Belgian manifestations of the "cultural" Cold War, the struggle for cultural and ideological supremacy between the United States and the Soviet Union. The combination of the economic and cultural perspectives will provide a fresh look at the Belgian dimensions of the conflict between capitalism and communism.

The renewed focus on the Cold War also brings CegeSoma into line with an older tradition of research into the history of anti-communism in Belgium at the time. The main products of this tradition were the publications on the assassination of the communist member of parliament Julien Lahaut, in 1985 (Rudi Van Doorslaer & Etienne Verhoeyen, De moord op Lahaut : het communisme als binnenlandse vijand) and in 2015 (Emmanuel Gerard, Widukind De Ridder & Françoise Muller, Qui a tué Julien Lahaut ? Les ombres de la guerre froide en Belgique). Those studies showed the strong implication of economic elites in the creation of a Belgian Cold War culture.