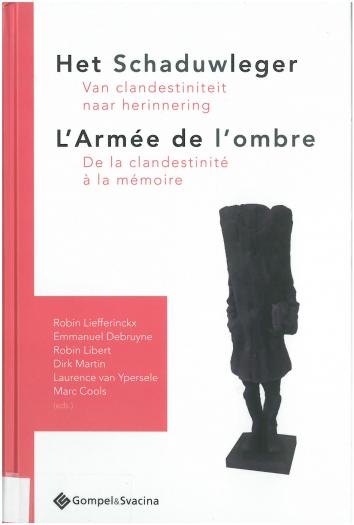 Originally, the year 2020 should have been marked by commemorative events related to the 75th anniversary of the end of the Second World War. Unfortunately, many of these events had to be cancelled due to the health crisis. However, some initiatives were nevertheless successfully completed. For example, the bilingual book ‘Het Schaduwleger / L'Armée de l'ombre’ (« The Shadow Army ») was  released, focusing on the agents of intelligence and action services. It is a follow-up of the memorial book published in 2015 on the occasion of the 70th anniversary of the " Royale Union des Services de Renseignement et d'Action " ("Royal Union of Intelligence and Action Services"). As a reminder, it included the names of the 18,716 recognized intelligence agents as well as an overview of the 129 intelligence and action services and missions. At the same time, research on this very closed and very specific group of the Resistance was experiencing unprecedented momentum. Of course, certain aspects of this history remain to be written, but it is nonetheless true that our knowledge of this "glass house" of intelligence and action has been refined; an evolution that owes much to the hard work of a few researchers, but also to various archives preserved at CegeSoma.

From clandestinity to memory

The book ‘Het Schaduwleger / L'Armée de l'ombre’ obviously contributes to our knowledge of part of the Belgian resistance. Several researchers directly or indirectly linked to CegeSoma, now or in the past, have contributed to this book, among them Dirk Martin as co-editor, together with two associated researchers, Marc Verschooris and Etienne Verhoeyen, as well as Emmanuel Debruyne, Laurence van Ypersele and Chantal Kesteloot. Its originality lies in its articulation focused on both historical and memorial dimensions. The approach is both human and institutional. Several texts thus highlight the dramatic experiences of certain agents but also the impact on families and, in particular, on children. This story does not finish with the end of the conflict because the hour of liberation comes at a time of delicate questions about recognition and a return to "normalcy". What will their status be? How to overcome the physical and/or psychological after-effects and succeed in their professional reintegration? For some, it is a certain frustration that will prevail because they no longer feel useful and cannot share their experience, especially in the very closed world of intelligence. In this context, the role of associations will prove to be essential, as several contributions show. There is also the more general question about the place of the resistance in post-war Belgian society, and also the more international perspective with, for example, commemorations linked to the Comet network (‘réseau Comète’). For others, Germany's capitulation is not an end in itself. Indeed, some of these agents will move on to other fields in a context that very quickly becomes that of the Cold War.

Valuable and much consulted archives

Several contributions to this volume were made possible thanks to various archival fonds held at CegeSoma. This is notably the case of the very rich archives of the Belgian State Security (‘Sûreté de l'État’) deposited in 1993. In particular, there are more than 46,000 files of men and women closely or remotely linked to the activities of intelligence, escape, propaganda or armed action networks, orchestrated from London by the Sûreté de l'Etat or the Second Directorate of the Ministry of National Defense. General files supplement these individual files.

Other archival fonds kept at CegeSoma also allow a better understanding of this chapter from the history of the Resistance. The William Ugeux and Louise de Landsheere archives, as well as those of the Luc-Marc networks, have been used by several authors. Let us also mention more specific fonds such as the 385 letters from  from people sentenced to death gathered on the initiative of Fabrice Maerten.

Beyond these archives, our Center is also particularly rich in the field of periodicals published after the war by the fraternal organizations and veterans other associations linked to the world of intelligence and action, not forgetting documents related to the many commemorative events.

Local, national and international approaches; individual dimensions and collective structuring, are all aspects addressed in this book. A great Christmas gift to put under your tree !