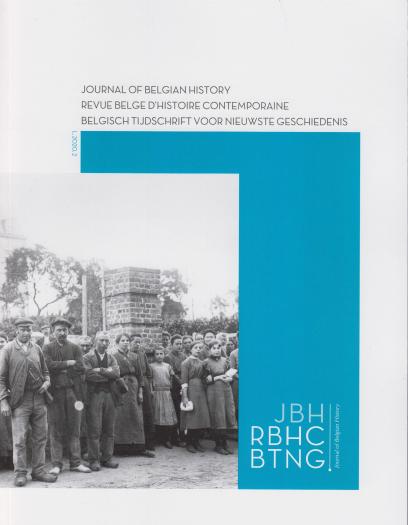 The second issue of the Journal of Belgian History  (RBHC - Revue Belge d'Histoire Contemporaine) of 2020 has just been published and can be ordered from Hilde Keppens  (CegeSoma) or via jbh-admin@cegesoma.be. It consists of four articles which will be added in 2021 to the digital archives of the RBHC, fully accessible via www.journalbelgianhistory.be.

The first contribution (in French) is the work of the young historian Thomas Briamont, who holds a Master's degree in History (2018) and a Master's degree in Art History and Archaeology : Museology (2019) from the University of Liège. His article on Belgian diplomatic strategy towards the "German problem" during the Second Berlin Crisis (1958-1961) - in the middle of the Cold War - is based on his Master's thesis. Using the concept of "securitization", he studies how the Belgian representations of Germany contributed to determine the diplomatic strategy during this crisis.

The second article (also in French) is written by Simon Watteyne, who is currently conducting doctoral research on Belgian tax policy in the 19th and 20th centuries at the ULB. His article adds a whole new dimension to the already well-studied First School War (1878-1884), since it analyzes how tax policy was used as a strategic political instrument to finance the new school legislation.

The research of Stan Pannier and Frank Caestecker (in Dutch) also focuses on the financial and economic sphere, but that of the private sector. Based on how two small Belgian companies introduced the instrument of consumer credit in the Belle Époque, they examine how a prudent basis was established for the later consumer society. Stan Pannier is a researcher at the Vlaams Instituut voor de Zee (VLIZ) where he studies the maritime history of the Southern Netherlands. Frank Caestecker is a professor at the Department of Economics at UGent and has published extensively on migration and refugee policies. He is currently researching European immigration policy and the history of financial economics in Belgium.

The last article (in Dutch) was also written by two authors. Antoon Vrints is a professor at the University of Ghent and a specialist in social history during and around the First World War. Dominique De Groen is a historian, poet and essayist. Together they examine in their article the processes of national identification during the First World War among the poorest sections of the population, based on written requests for material assistance.