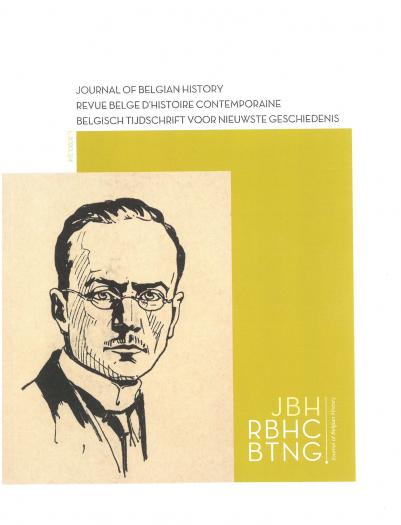 The last double issue (3-4) of the JBH (Journal of Belgian History) of 2020 just came out. It contains five articles on a variety of themes, mostly from freshly defended doctoral or master's theses, and 10 critical reviews of recently published academic works.

The first contribution (in Dutch) comes from the PhD dissertation (2019) of a Ghent historian, Jan Naert. In this article, he puts into perspective the actions and strategies put in place by burgomasters and mayors in their attempt to secure a non-violent transition from peace to occupation status during the First World War in occupied Belgium and Northern France. This new approach makes it possible to nuance the historiography of this period, which is still too often focused exclusively on German violence against civilian populations.
The second contribution (in French), written by Alain Rahier, who holds Masters degrees in History and in Military History, studies in depth the way in which the Anglo-Dutch and Prussian occupation troops, who in 1814-1815 shared the territory of the future Belgium, financed this occupation.
The third article (in French) is signed by Iris Flagothier, holder of a double master's degree in History and Museology. She analyzes the history of the Walloon Movement through the history of gender by focusing on the Union des Femmes de Wallonie and its driving force, Marguerite Horion-Delchef. A 'Union' which, despite its relative failure at the level of women's emancipation, will, within a Walloon Movement essentially reserved for men, prepare the ground for women's movements over the following decades.
The fourth contribution (in English) is based on Heidi Degerickx's PhD (2020) and is the product of a co-authoring with her three (co-)promoters. On October 17, 1994, the United Nations proclaimed the first 'World Day Against Poverty' on the occasion of which a 'General Report on Poverty' (GRP) was published. This was an important step in the Belgian political management of poverty, which brought about a form of public recognition of the interest and care for the socially disadvantaged and introduced the idea of giving a voice to the poor. This article analyzes the genesis of this report and examines how the social actors involved in its writing tried to mobilize the 'voice of the poor' as a rhetorical instrument.
The last article (in Dutch), written by Nico Wouters (CegeSoma-AGR, UGent), looks at the case of Leo Vindevogel (1888-1945), war burgomaster of Ronse/Renaix, the only parliamentarian to have been executed for acts of collaboration after the Liberation. After his death, he became, as a martyr, one of the most iconic symbols in Flanders of the so-called failure of post-war repression. This article analyzes in depth the link between 'historical truth' and the formation of a myth.

This double issue can be ordered from Hilde Keppens (CegeSoma) or via jbh-admin@cegesoma.be. The articles will be added in 2021 to the RBHC's digital archive, which is fully accessible via www.journalbelgianhistory.be.