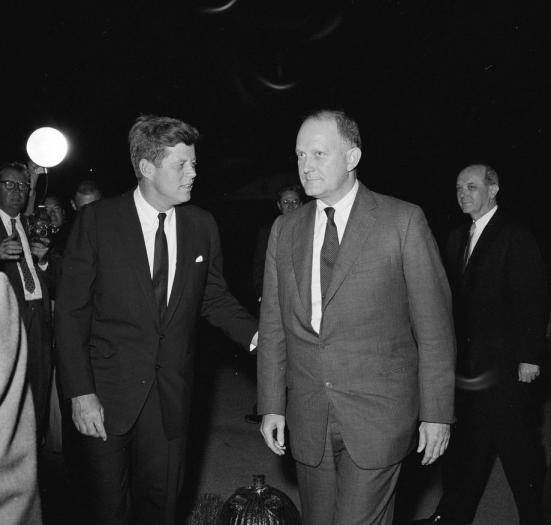 BELCOWAR. ‘Belgium and the Cold War: Gaining or Losing Sovereignty through Pax Americana’ is a joint initiative of the State Archives and KU Leuven being carried out within the framework of the FED-tWIN programme of the Belgian Science Policy Office. By funding a long-term research project, the expertise of a federal scientific institution and a university is combined and strengthened.

BELCOWAR studies the economic impact of the Cold War on Belgium.  It focuses on economic policy, particularly with regard to international trade (the so-called GATT rounds), and the effects of the US macro-economic policy pressures on European countries. Two types of expertise are combined in this project. Unexplored archives preserved by the State Archives are analysed on the basis of political and economic concepts generally applied in political sciences. This allows for innovative historical research into the manner in which European countries have tried to shape their economic policies in the context of the Cold War. It will also allow further exploration and exploitation of the rich archives of various political and corporate bodies. More precisely, BELCOWAR will make it possible to establish fresh ties between the academic community and a new generation of historical researchers. Political and economic historical research can give new impetus to the study of the Cold War and expand the existing political and cultural approaches to the topic by focusing more on how the economic dimension has shaped transatlantic relations. In this sense, BELCOWAR will culminate in the development of a veritable line of research in which many other social actors will be involved in addition to state agents and companies.

In the first two years of the project, the focus will be on fundamental research into the so-called GATT Dillon Round (1960-1961). In terms of service to the public, a finding aid will be drafted that will enable researchers to navigate the different archives related to the political and economic history of the Cold War and Belgium. Thanks to this guide, archives that have already been made accessible will benefit from visibility within the Belgian and the international research communities. A conference dedicated to a political and economic approach to the Cold War will also be organised at CegeSoma during this period.