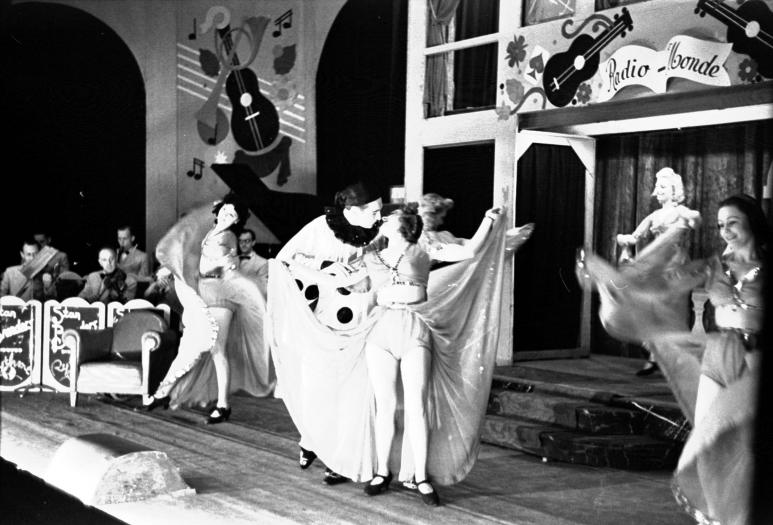 Prior to the confinement, a workshop was held on 12 and 13 March at CegeSoma. It was organised by the Institute for Media Studies of KULeuven on the initiative of Roel Vande Winkel and Leen Engelen, in collaboration with CegeSoma/State Archives, and tackled the subject of the ‘cultures of spectacle’ in occupied Belgium during the First- and the Second World War. A dozen of papers were presented; unfortunately, due to the Coronavirus, a number of registered participants could not attend. Nevertheless, these two days were rich in discoveries and discussions.

The topics addressed, ranged from politics through the objectives of the occupier to the behaviour of the occupied population. In 1914-1918, the implementation of a cultural policy may have seemed as a strategy by the occupier to make the population forget about the circumstances of the invasion and the massacres of civilians. In 1940-1944, the ideological aspect was probably more pronounced and it translated into a massive influx of German works and productions, some of which could clearly be identified as “Nazi”, while others could be categorised as belonging to the larger Germanic cultural heritage. In this regard, the German occupier also took some local specificities into account by applying a different cultural policy to the French-speaking population and to the Flemish population.

Wars appear as both times of constraints but also of needs in terms of culture. Which cultural policies are carried out in this regard, and which types of spectacle take place? How to understand the attitude of the public? For example, during the First World War, some people attended shows in order to entertain themselves, others simply to keep warm. In both conflicts, the entertainment sector is subject to censorship; additionally, in 1940-1944, Jewish artists are excluded. For other artists, the wars provide opportunities: competition is no longer as strong and the need for entertainment is rising. Further analysis remains yet to be done however. Things were clearly evolving: While some people showed a kind of “patriotic restraint” during the first global conflict and did not attend spectacles, this moral stance - or “cultural demobilisation” as John Horne coined it - seemed to lose ground as from 1916. During the Second World War on the other hand, the first two years of occupation seemed to be more marked by some kind of acclimatisation - also culturally - than what would be the case later on.

Studying these "cultures of spectacles" also implies having a look at the infrastructures in which they are accommodated. At the time, Belgium counted hundreds of cinemas that also had neither the same type of audience, neither the same programme. Finally, cultures of spectacle take various forms of expression. We were not able to address all of them during these two days. For some of them sources are scarce. Nevertheless, interesting research opportunities could arise by looking at more popular cultures, that might have scared the ruling classes. Other research fields, about visual sources among others, still remain underexplored, as pointed out in the conclusion by Sophie de Schaepdrijver. The same is true for the issue of career strategies or the impact of the wars on both the entertainment sector and infrastructures, but also on long-term cultural policies. In short, a vast and promising area of research from which we hope to soon get first published results.

For now, we recommend you this website (https://www.cinema-in-occupied-belgium.be/) – to be launched soon – with some first new perspectives. This website will enable you to locate all cinemas active in Belgium during the Second World War and to find out which films were shown. To be continued!