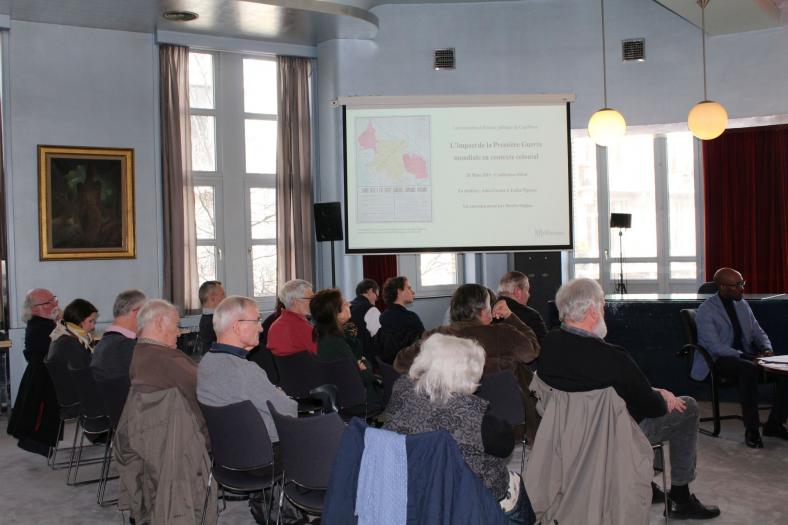 With the end of the commemorations of the First World War, we can make one observation : the overseas colonies, which played a considerable historic role in this conflict, were nevertheless relatively absent in all the initiatives of the last four years.

On the occasion of its second meeting of public history, CegeSoma wished to give the floor to two Africanist historians (Anne Cornet and Enika Ngongo) to put into perspective the different issues of the time and their consequences on local populations. The debate was led by Dantes Singiza.

Shortly after the Belgian Congo entered the war, the Ministries of Colonies and Foreign Affairs, then in exile, already planned ahead with regard to potential territorial gains that Belgium could gain from its military involvement in Africa. The objective was to conquer neighbouring territories in German East Africa so that Belgium might exchange them, during the post-war negotiations, for territories located along the Atlantic Ocean. However, in 1919, Belgium was only able to gain the mandate-territories of Ruanda-Urundi.

What happened that Belgium's ambitions were so significantly reduced? In Rwanda, the end of the war was marked by a military occupation lasting several years, then by the establishment of an administration system presented as independent, but in reality strongly influenced by the colonial model of the Belgian Congo. Local authorities had to accept new functions or were excluded from power entirely. New types of rules and labor chores were imposed on the population, all of which led to a system of  colonization that went much further than that of the German predecessor.