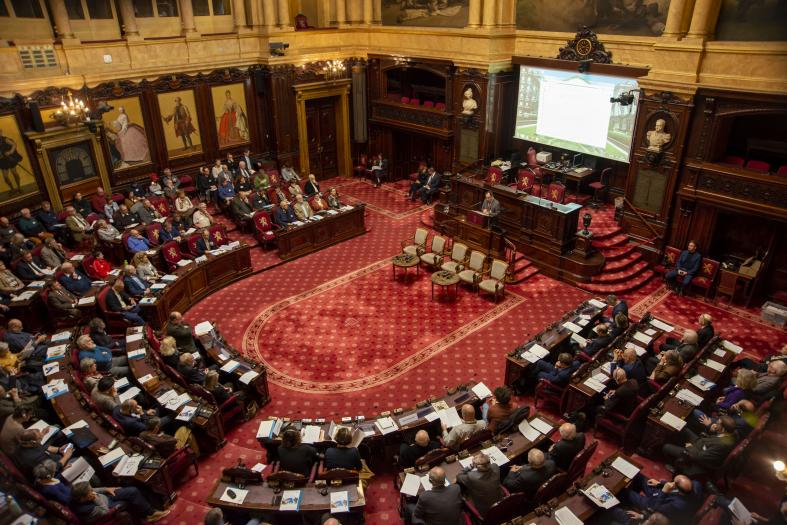 On December 10, 2019, 200 people attended the study day at the Senate on the occasion of the 50th anniversary of the Centre for War and Contemporary Society (CegeSoma – State Archives).

Nico Wouters (head of CegeSoma) gave a five-point overview of 75 years of history and presented the thematic 'anniversary edition' of the Belgian Review of Contemporary History. His presentation was followed by two international perspectives, one from the Netherlands and the other from France: Ismee Tames (NIOD-Amsterdam) spoke about the complex triangular relationship between research, the public and the media and Cécile Vast (Museum of Resistance and Deportation of Besançon) spoke about the importance of archives resulting from research.

In the afternoon, Dirk Luyten moderated the panel discussion on the relationship between research and sources with guests Bruno De Wever (UGent), Pierre-Alain Tallier (State Archives), Pieter Lagrou (ULB) and Sophie De Schaepdrijver (Penn State University).  Overall conclusion: there is still a lot of work to be done!

The second panel discussion, moderated by Chantal Kesteloot, was devoted to public history. José Gotovitch (former director of CegeSoma), Franky Bostyn (War Heritage Institute), Koen Aerts (UGent) and Anne Roekens (UNamur) discussed, among other aspects, the role of emotion in history and the tensions between commemoration and history.

The plenary debate with the many participants was far too short and showed the diversity of the issues. The speeches focused in particular on the many gaps in research, but also on the tensions between memory (and the duty to remember) and history. Karel Velle (Director General of the State Archives) underlined at the end of the day the many perspectives for the future.

The last word has not yet been said. The time for debate was too short. In the coming weeks and months, we will review the results of this study day: through the publication of certain presentations, a photo report, reflections on the blog www.belgiumwwii.be and new activities. You can already find the thematic anniversary edition of the RBHC (No. 2-3 of 2019). It includes sixteen texts by 21 authors about 75 years of history of the Second World War in Belgium.