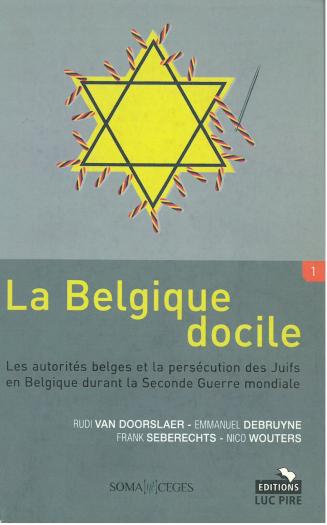 In January 2003, the Belgian Senate adopted a resolution entrusting CegeSoma with the task of conducting a historical inquiry into the possible responsibility of the Belgian authorities in the persecution of Jews in Belgium.

This type of "commissioned study" is quite exceptional in Belgium. On 1 September 2004, research began under the direction of Rudi Van Doorslaer, assisted by researchers Emmanuel Debruyne, Frank Seberechts, Michaël Amara (who left the project after one year) and Nico Wouters.

The final report of this research was presented in February 2007. Later in the year, it was published in book form, in Dutch and French. The book is a full edition of the results of the final report. Emmanuel Debruyne, Frank Seberechts and Nico Wouters wrote the main body of the book; Lieven Saerens wrote the introduction chapter on German antisemitic policy and Rudi Van Doorslaer authored the final conclusion.

The book deals chronologically with the development of the persecution of Jews. The concept of Belgian authorities is interpreted in a broad sense: from magistrates and municipal administrations, communal police and foreigners' police, to education, the government in London and groups such as doctors, notaries and lawyers. The post-war treatment of the legacy of Jewish persecution is also addressed (the search for missing persons; the repression of German and Belgian criminals).

The book takes a critical look at the sometimes very active role of certain authorities. It is a first-rate scientific reference that also prompted numerous political reactions in 2007-2008.

In 2011, historian Anne Roekens published a summary of the book, designed for educational purposes.

This substantial result of research commissioned by the Belgian Senate  is a comprehensive analysis and overview of the role of the Belgian authorities in the persecution of Jews during the Second World War ...